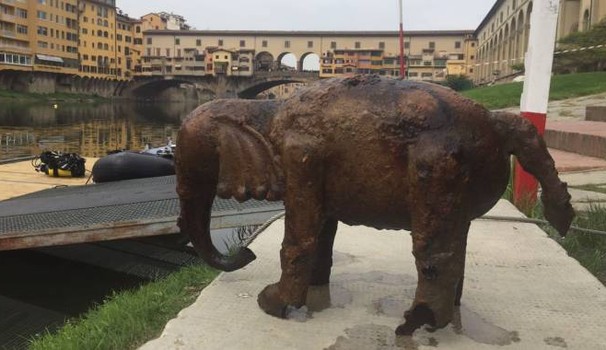 As reported today in Florence’s newspaper, La Nazione, police have been searching for an experimental security drone that crashed into the Arno River earlier this week.  The drone was being used to provide security for Prince Charles and his wife, Camilla, during their visit to Florence, but since it was an experimental drone, the Italian authorities decided to only fly it over the Arno River, rather than the streets of Florence for security reasons.  Thanks to the security measures of Italian authorities, when the drone failed, not only was no one injured, but through the Italian police’s search efforts, something even more valuable than the drone was discovered resting on the bed of the Arno River… something perhaps even significantly more valuable: a statue of an elephant!

The reason this could be very significant is that the Arno River has a history of severe flooding.  In 1177, for example, a treacherous flood destroyed Florence’s Ponte Vecchio (“old bridge”), sweeping many valuable statues into the water with it.  Since then, other wicked floods took place in 1333, 1547, 1557, 1589, 1740, 1758, 1844, and 1966, wreaking havoc on the city of Florence at large, sweeping away art, statues and other priceless artifacts, many of which were created during the Renaissance period.  According to the article, the value and origin of the elephant are being investigated.

Since Florence is in fact the epicenter of Italian art, it’s not surprising to me that a mysterious statue of an elephant was discovered in the river.  What is surprising though is that it was discovered today.  It is not like a lost treasure was discovered 12,000 feet below sea level somewhere in the endless Pacific Ocean.   The Arno River is probably about 20 feet in depth, with a width of about 120 feet.  It is right in front of everyone’s eyes in Florence.  You would think that with all the rich history, archaeologists or Italian treasure hunters would have uncovered this statue already.  Nevertheless, I am pleased that it was uncovered and I would like to think there are many more treasures resting on the bed of the Arno today, only to surface throughout the generations.  I look forward to reading about the investigation into the history of the elephant and when I find out, I will update this post.