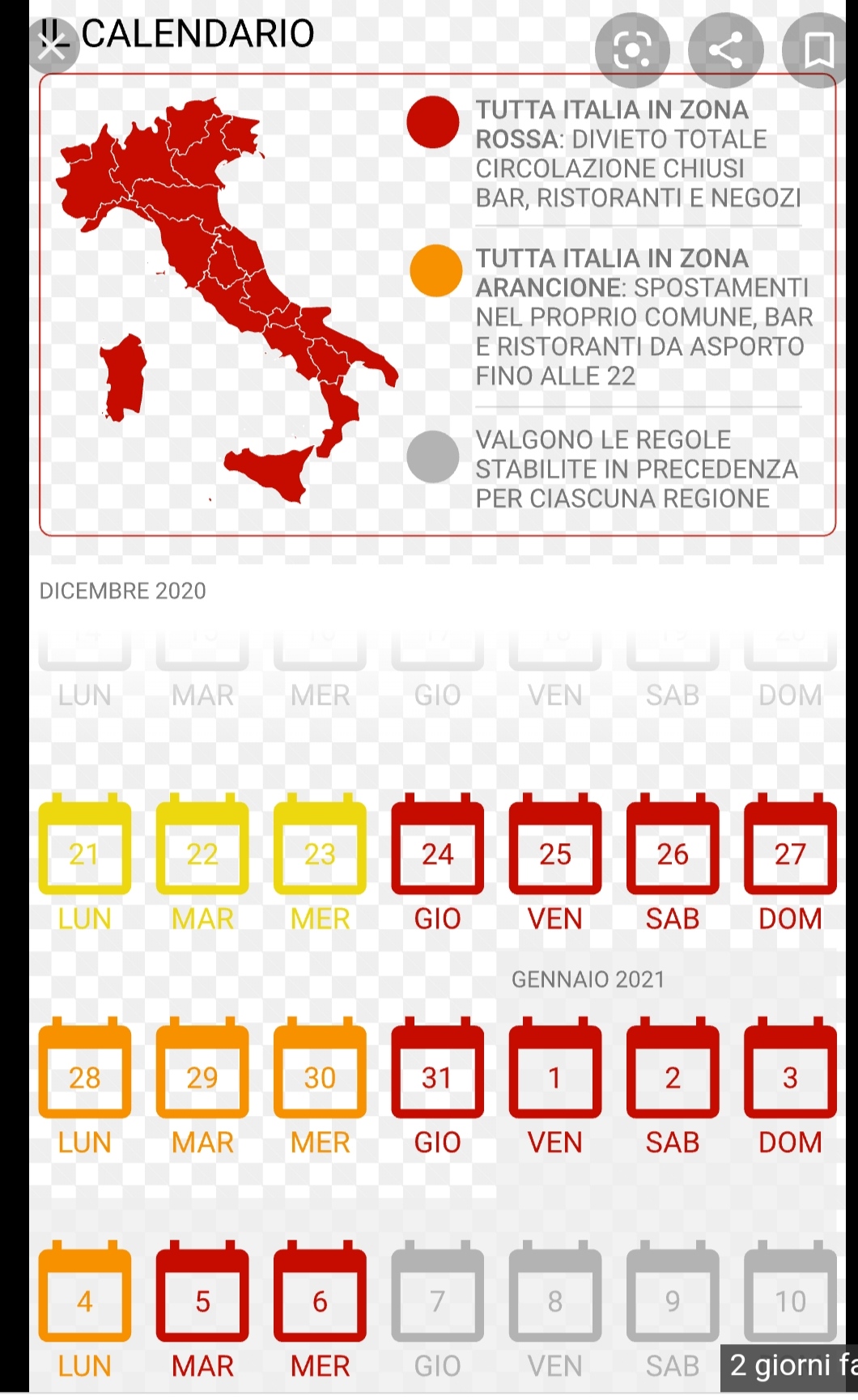 Covid continues to be severe in Italy, making it the most-affected country in Europe and one of the most impacted countries in the world. With sacred Christmas holidays approaching – December 24, Vigilia di Natale; December 25, Natale; December 26, Santo Stefano; December 31, San Silvestro; January 1, Primo dell’Anno; and January 6, Epifania – families and friends long to be together for the festivities and return to a normalcy they all once enjoyed. Unfortunately, due to the ongoing Covid problem in Italy, the government has placed tight restrictions through the holiday period.

Red regions require total lockdown. Residents are permitted to leave their home only for “proven needs”, e.g., work, food, hospital. All shops are required to close in Red regions, except for food shops, drug stores, pharmacies and newsagents.

Orange regions require only partial lockdown, where restaurants and bars remain closed, but the residents are afforded the right to move freely around their towns and cities (but still cannot leave the province absent a family or medical emergency).

Yellow regions have limited restrictions, but consistent with those imposed nationwide. For example, while restaurants and bars may operate, they must close by 6pm, and there is a curfew from 10pm to 5am. Further, public transportation has been decreased by 50%, and museums, gyms and swimming pools remain closed. In the whole country, only primary and secondary schools are open; high schools and university students take their lessons from home.

Now, as we enter the Christmas holidays, the Italian Prime Minister, Giuseppe Conte, has decided that the color codes will be uniform through the whole country, depending on the days of the Christmas holidays. All Italian regions will be Red on the busiest days for shopping and family gatherings (December 24, 25, 26, 27, 31; January 1, 2, 3, 5, and 6); and Orange on the days which are not Catholic days and thus considered less busy (December 28, 29, 30 and January 4). See the chart below:

During Red days there will be no bars or restaurants open, and there will be a limited amount of people who can attend Christmas mass in every church (and no mass later than 10pm). Further, families cannot be visited by more than two relatives at a time (plus one child allowed if under the age of 14). It is also forbidden for Italians to leave their town and region, but they can visit family and relatives so long as they do not leave the region.

During Orange days over the holidays, bars and restaurants can do takeaway or food delivery service until 10pm, but residents cannot leave their towns unless they have less than 5,000 inhabitants, in which case they cannot travel more than 30 km from their home. Still, no more than 2 people are permitted to visit family at a time.

These restrictions get tricky for Italians who live near the border between regions. Ferrara, for example, is just 8 km away from the border between Emilia Romagna and Veneto, which is marked by the River Po. Some elderly parents and their children live opposite to each other on the two different banks so they won’t be able to spend Christmas together.

Naturally, like everywhere, Italians have been quick to point blame at what they believe brought Covid to Italy. The easiest aim was China and the Chinese (i cinesi). The result was a total revolution against i cinesi. Italians started boycotting Chinese hairdressers, nail centers and shops as the prejudice against the Chinese in Italy grew.

Then, since Covid had its initial presence in the Northern part of Italy, the North and South started blaming each other. During the summer of 2020 when everything seemed to be returning to normal, the need to go out led people to book vacations. It is during this period when Covid proliferated again, and the questions therefore became: “Is it the Northern people’s fault for traveling to the south? Or is it the Southern people’s fault for not caring about wearing masks?” The prejudice therefore between the North and the South was reinforced and compounded.

Then, Italy as a whole started blaming their own Government. The Italian Prime Minister has lost popularity with his strict decrees (decreti), and most Italians have not seen stimulus money, even though the Government has promised to help them financially.

As Italians enter an unprecedented Christmas holiday, they see everything shutting down once again where every Decreto is stricter and stricter.

In addition to the physical affects of Covid, Italians have been severely impacted psychologically from the pandemic and psychological assistance centers throughout Italy have reached full capacity. Lockdown has indeed left a deep wound in the souls of Italians whose lives have always centered around community, togetherness and family. Italian people feel lonely and isolated, especially elderly Italians. There’s no more talking to the grocer, playing with grandchildren, going for a walks, etc. (unless Italians have a dog, in which case they are permitted to go for a walk)! It’s no wonder why all of a sudden last spring everyone in Italy wanted to adopt a dog!

As we all enter the Christmas holiday, Italian Enthusiasts will continue to hope for the best for Italy, so that we can all return to the normalcy we all once enjoyed and visit Italy soon.

Office Space in Italy for Tourists and Italian Enthusiasts