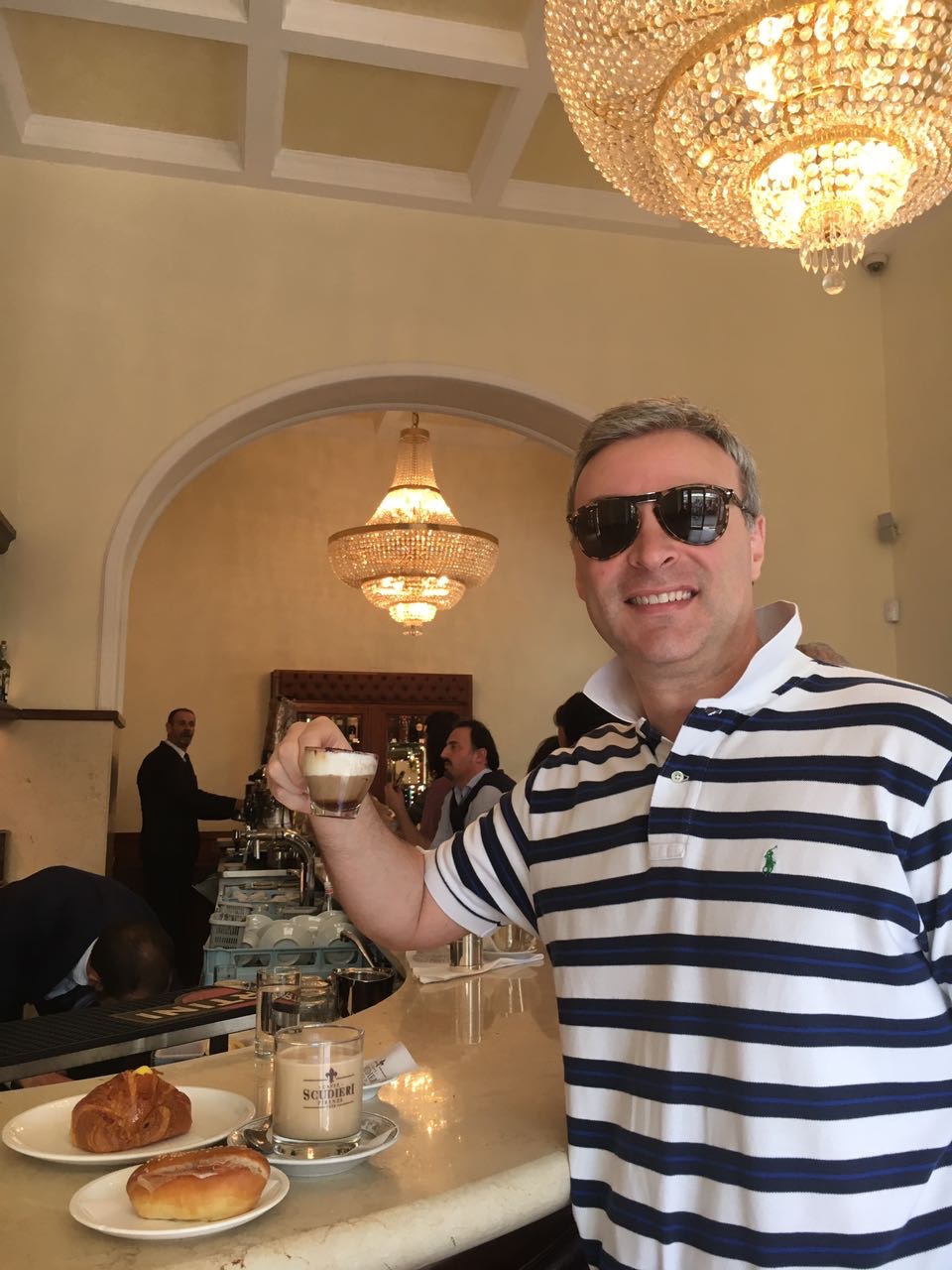 Italian Enthusiasts know that when in Italy, the very first thing you do in the morning is “take” a coffee.  And then again three hours later, and again three hours later, and then again three hours later.  Whether you are at a coffee shop in a city center, or at the Autogrill off the autostrada, Italians squeeze together at bars while they shot down their espresso like an American would take a shot of whiskey.  But while the espresso shot is indeed the most common type of coffee for Italians, there are a number of other traditional types of Italian coffee that Italians enjoy.  I discuss several of the coffees below.

Espresso is the most common type of coffee that Italians drink.  It can be ordered at any bar by asking for “un espresso” or you can just ask for “un caffè”.  This type of coffee is a single shot of espresso.  If you only ask for “un caffè”, the barman will likely pour it for you in a ceramic cup, but if you want your shot of espresso in a small glass (like the espresso in the photo), you can order it “al vetro”, for example, “un caffè al vetro per favore” which means, “an espresso in a glass please”.  Other types of coffee can be ordered “al vetro” as well, like a caffè macchiato al vetro.

Caffè Basso is made using one shot of espresso, but a lesser amount of coffee is poured in the cup.  Italians order Caffè Basso if they only want a little taste of espresso. It can be ordered in a number of ways, including asking for “un caffè basso” or “un espresso basso” or “un caffè corto” or “un caffè ristretto”.  Some Italians, however, like more bang for the buck and ask instead for a “caffè alto”, which is also made with a single shot of espresso, but more coffee is poured in the cup than usual.  When Italians order a “caffè alto”, for example, some prefer it to be poured in a larger cup.  For this, they would ask for, “un caffè alto in tazza grande per favore”, which means, “a tall espresso in a large cup please.”

Caffè Macchiato (or Espresso Macchiato) is one shot of espresso in a small cup with just a spot of cream.  The process of making the cream is an art that only Italian barmen can seem to figure out.  It requires a machine that heats milk through high pressure steam.  Some Italians, however, prefer the milk to be cold, in which case they order a Caffè Macchiato Freddo, where the espresso is hot, but the milk is cold and non-creamy.  Nine times out of ten, I personally order the Caffè Macchiato, and I like to drink it al vetro.

Caffè Corretto is one shot of espresso with a spot of liquor, usually grappa, sambuca or brandy.  “Corretto” means “correct”, so the implication is that coffee without liquor is incorrect. This version of coffee cost a little more money due to the addition of alcohol.  It is usually served with only espresso (no milk) to get the fullest taste of the liquor.  The corretto can be ordered in other coffee versions as well, i.e., doppio corretto (double espresso shot), caffè basso corretto (short espresso shot), caffè alto corretto (long espresso shot).

Cappuccino is one shot of espresso in a larger cup with cream.  Similar to a Caffè Macchiato Freddo, you can order a Cappuccino Freddo, which is one shot of hot coffee with cold milk.  And within the cappuccino family, different versions can be ordered.  A cappuccino chiaro is a lesser amount of espresso in a cup with a larger amount of cream (the cup therefore is mostly milk).  Or, if you want the opposite, you can order a cappuccino scuro which includes more than usual espresso with less than usual cream.

A Marocchino is served in a small glass cup (al vetro) and it is made in layers.  First, cocoa powder is poured in the cup, followed by one shot of espresso.  Then another layer of cocoa powder is poured, followed by cream.  Once the cream is in, then one more layer of cocoa powder is added.  Since the coffee is always served al vetro, it is easy to see the different layers of ingredients.  The word Marocchino means Moroccan in Italian.  The coffee has this name because of its color, as marocchino was a type of light brown leather called Morocco leather.

Caffè Shakerato is usually served in a small wine glass.  It consists of one long shot of espresso that you put in a shaker (the type of shaker used to make cocktails), and once it is in the shaker, you add liquid sugar and ice and shake it vigorously before pouring the mixture into the glass.  Caffè Shakerato can also be served corretto with Bailey’s Irish Cream, and the shakerato in general is popular in the summer months since it is served cold.

Caffè d’Orzo (or just Orzo) is served in a large cup and it is not prepared with the same machine as espresso is prepared.  Although an espresso-style drink, caffè d’orzo is usually ordered by Italians who do not drink coffee because it is caffeine-free and made from ground barley.  Some Italians believe it is a healthier choice.  Orzo can also be ordered as a macchiato (Orzo Macchiato) or even in cappuccino form (Cappuccino d’Orzo).

Caffè al Ginseng is not made with espresso in the espresso machines.  It is an herbal drink made with ginseng powder.  To order a Caffè al Ginseng, you would request, “un ginseng”.  Italians like this drink because it is a popular coffee substitute and it gives you a lot of energy.  This drink is always served hot.

Creme di Caffè is a delicious summer treat and can be found at coffee bars during the summer months.  It is a thick ice coffee shake, almost like a coffee ice cream.

The above list of coffees is not complete.  You can find many different versions of coffee all throughout Italy, but the above list is a good selection of the more common forms.  Of course, for Americans, if you don’t want to drink coffee like Italians, you can always order Caffè Americano anywhere you go.  Caffè Americano is precisely the type of coffee we as Americans are used to in the United Stated.  It is served in a big cup, and includes one shot of espresso mixed with very hot water.

If any readers prefer different versions of coffee, or if any readers have pictures of coffee from when they were in Italy, you are encouraged to post.  Italians are coffee snobs because they take coffee very seriously and know the difference between good and bad coffee, unlike most Americans.