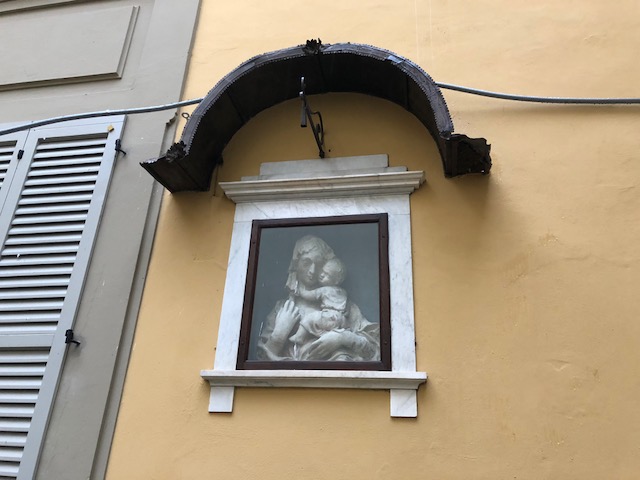 Visitors of Florence can’t help but to notice religious plaques, alters and tabernacles constructed into the walls and corners of residential buildings all throughout the city.  At first glance, it’s apparent that they are old, and also venerable, but their origins are unknown to most visitors.  This week I had the pleasure of speaking with Florence’s well-respected tour guide, Alessandro Norcini, about the origins of these religious symbols.

It started in the 1200s when Saint Peter of Verona was asked by the Popes of his time to fight against heresy.

Saint Peter preached all over Italy, including Rome, Bologna, and Genoa, and then in 1244, Pope Innocent IV requested that he fight against heresy in Florence.  At the time, Catharism was widely practiced in Italy and the Catholic church made active efforts to stop it.  Saint Peter arrived in Florence, denouncing heresy and told all Florentines that if they were truly Catholic, that they should demonstrate their allegiance to the Catholic Church by placing an image of the Virgin Mary and Baby Jesus on the exterior walls of their home.  In the 1200s, these images were made of wood.

Approximately 100 years later, the Black Plague (also known as the Black Death) hit Florence, reducing a population of about 120,000 inhabitants in 1338 to about 50,000 inhabitants ten years later.  The Catholic clergy, concerned that conducting mass indoors could facilitate the spread of the pandemic, decided to hold mass outdoors.  These plaques and wooden images of the Virgin Mary and Baby Jesus became modified to serve as a place of worship, or a tabernacle, where mass would be held.  Either worshipers stood near the outside tabernacle during mass, or they attended mass from their homes, looking out the windows, during such a scary moment in history where people were unsure if they would live to survive another day.

The Black Plague passed, and as Florentines entered the heart of the Renaissance period, the wooden images became beautified and what started as strictly a religious symbol, became a fashion.  Homeowners would compete with their neighbors to make sure their tabernacles were more beautiful than the others in their piazzas.  With art flourishing through the Renaissance period, tabernacles evolved, in many places, as pieces of art.  Today, some original tabernacles can be found, but most have been replaced with copies with the originals being stored in museums or in private storage.

Today the outside tabernacles add a charm to Florence, making the entire city a museum, filled with invaluable artifacts on every street corner.