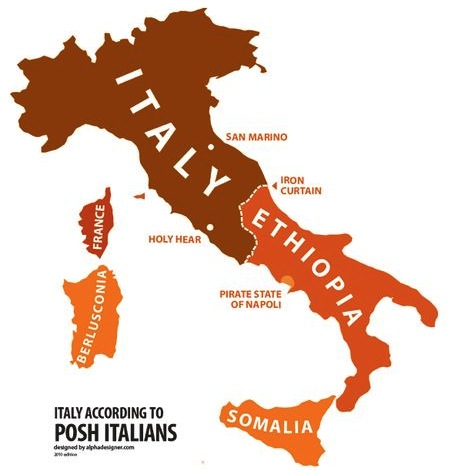 In Italy, stereotypes are rampant, not only of foreigners but also of Italians.  Every time I travel to Italy, I discover another stereotype about a person from a specific Italian region.

As a fun exercise, I asked a handful of Italian friends from different parts of Italy, including Florence, Naples, Rome & Sicily, to elaborate on the different Italian regional stereotypes. Surely as Americans, for example, we know of our own stereotypes we have for people from different states, and in reality we often know they are just plain ignorant, but they do exist and oftentimes they are quite comical.  Stereotypes are prolific in Italy, and for an Italian Enthusiast, it is worthwhile to discover them, because to truly be immersed in Italian culture, it is necessary to understand all aspects of Italian culture, including its stereotypes.

Here is a summary below!

Italy is divided into two main stereotypes: POLENTONI and TERRONI.

The people living in the northern regions of Italy are called “polentoni”, which comes from the food “polenta”.  Polenta has historically been one of the most popular foods consumed in northern Italy, and if a southern Italian wants to say something derogatory to a northern Italian, he would say (among other things) “Mangia Polenta!”, which means “Go Eat Polenta!”

In addition to these two general stereotypes, Italy does not stop there.  Stereotypes are also broken down and directed at the various regions and cities of Italy.  A list (in no particular order) is below.  WARNING – the list is not meant to offend, only to have some fun!

Piedmont: Courteous, but fake and insincere.

Liguria: Very cheap and frugal.  In Italian, we say loro hanno le braccia corte, which means, they have short arms (too short to reach into their pockets for the money).  Also, gossipy and inhospitable.

Tuscany (Florence/Pisa/Siena): High usage of profanity, especially using God and the Virgin Mary’s name in vain.  Snobish, Arrogant.  They believe they speak pure Italian, unlike everyone else from other regions.  Also, people from Florence do not generally like the people from Pisa, and vice versa.

Lazio (Rome): Lazy, messy and the people rarely work.  Not elegant.  Exhibitionists.  Scoundrels.  Don’t follow the law.  Also, people living in Rome are called “burini” because as a result of their dialect, when they pronounce the word “burro” (butter), it sounds as if they are pronouncing the word “buro”.  To Americans it may not sound different, but saying “buro” instead of “burro” in Italian is an immediate sign that you are from Rome, and therefore, a “burini”.

Campania (Naples): Thieves, swindlers, superstitious.  They believe in things like the corna, cornetto, and malocchio. The corna is an upside down University of Texas Hook ’em Horns, and it is used in an equivalent fashion to when Americans would “knock on wood”.  The cornetto is a horn-shaped good luck symbol, and the malocchio is equivalent to the evil-eye.

Calabria: Mafia, stubborn, proud.  Strange dialect.  There is an Italian radio show that mocks the extreme dialect from Calabria.

Abruzzo: Kind and strong, but stubborn.  Eat a lot of meat.

Marche: There is a saying in Italy – “It is better to have a dead person inside the home than have a person from Marche at the front door.” (meglio un morto in casa che un marchigiano dietro la porta).  The reason for this saying is that years ago, the people from Marche were the tax collectors and they went door to door collecting taxes for the Pope.  Many people became angry over this and hence they never wanted people from Marche to come to their home.

Veneto (Venice): Workaholics, alcoholics, and they eat cats.  Always drive drunk, even after lunch when their cars zig zag all over the place.  People from Venice also believe they are better than people from other towns in the Veneto region.  People from Treviso are perfectionists and disciplined.  There is a saying in Veneto as follows, “Veneziani gran signori, Padovani gran dottori, Vicentini magna gati, Veronesi tuti mati, Trevisani pan e tripe, Rovigoti baco e pipe, Belunesi pochi sesti” and this refers to people of the many cities of the Veneto region.

Sardinia: Stubborn, and short in stature.  Overbearing.  Jealous and proud.

Puglia: They all live in homes called “trullo”, which is an Italian version of a tee-pee.

Aosta Valley:  Close-minded.  Impossible to understand when they talk because they speak a strange dialect which includes a mixture of Italian and French.  Mountain people.

Molise:  Superstitious, and emphasize the importance of the female role.

I welcome all contributions to add to the list.  If you know of a stereotype that differs from the above, please share (as well as your source)!!

Lastly, the first photo I’ve included on this post of the map of Italy was created by an artist named Yanko Tsvetkov.  He’s created many humorous maps of the world depicting prejudice from various perspectives.  If you like the map, you can visit his site at: www.atlasofprejudice.com for more.  While I cannot confirm whether or not the map is an accurate depiction of Italian stereotypes (i.e., the Ethiopia and Somalia reference), I can confirm the existence of a famous saying that northern Italians say, “dal po in giù l’Italia non c’è più,” which means basically that south of the River Po, Italy is no more.  Interestingly, since the River Po is in fact way up north, if this were true, then only about 1/5 of Italy would in fact be considered Italy by the northerners.