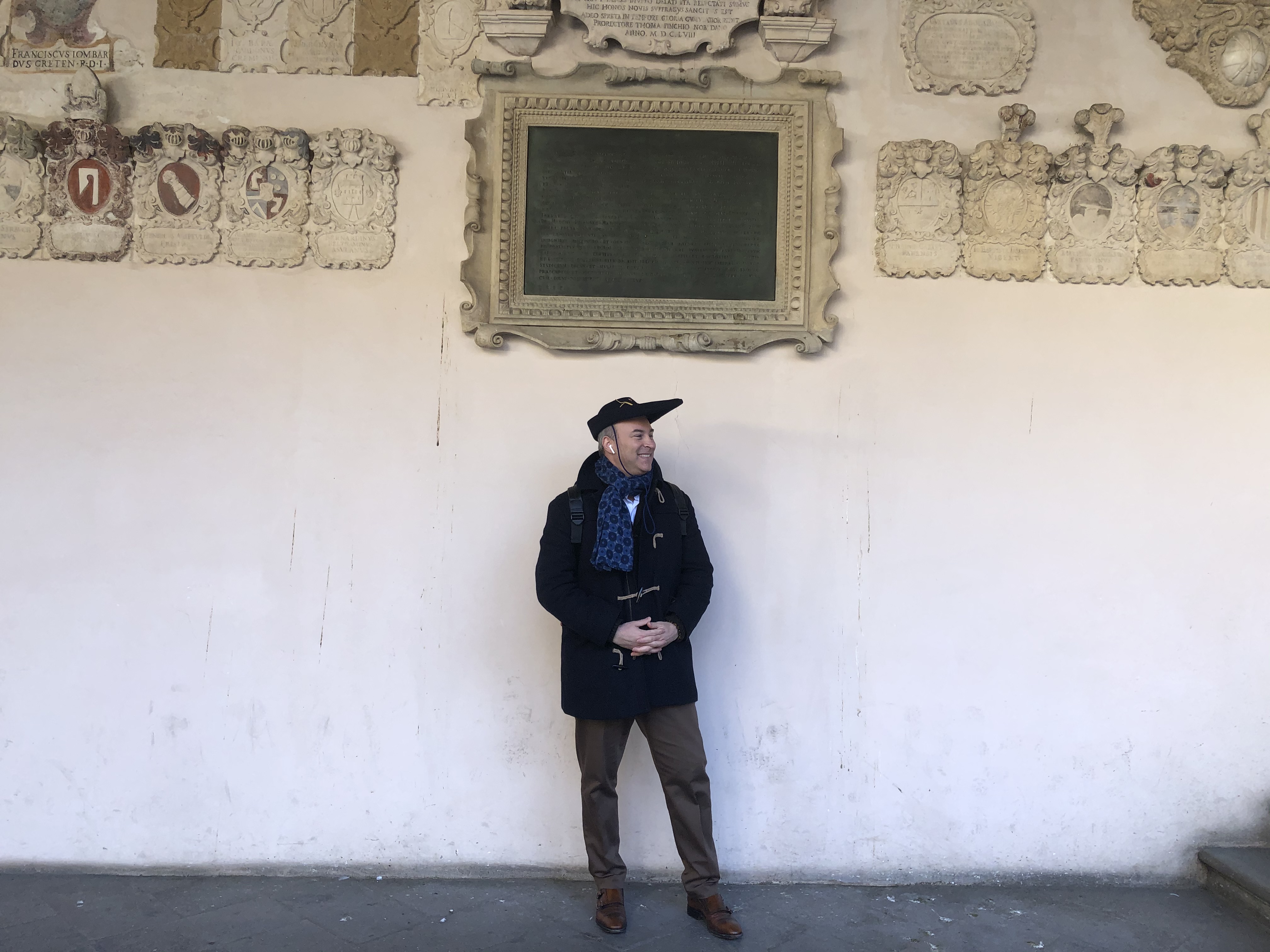 In the beautiful Venetian city of Padova, there is a store for gentlemen, appropriately enough, located in the Square of Gentlemen (Piazza dei Signori) called Callegaro e Doriguzzi.  While passing by the storefront this weekend, I could not help but to notice a strange-looking hat with an extra long beak.  This oddity drew me into the store to inquire.  The owner of the store informed me that the hat, known as Feluca Goliardica, is a traditional hat worn by Italian scholars (male and female alike), the color of which corresponds to a particular faculty or field of study.

The Feluca Goliardica is the main symbol for traditional university student associations (called Goliardia) similar to fraternities and sororities.  With origins in style dating back to the 14th century, the Feluca made its appearance in Padova in the 1800s, as well as other Italian universities such as Bologna, Pisa, Siena, and Urbino.  Americans recall that in the United States, tassels on college graduation caps are worn on the right side of the cap before the graduation ceremony, and are then moved to the left side directly after receiving the diploma.  There are similar rules relating to the Feluca, although much more comprehensive and meaningful.

In addition to the hat’s colors and corresponding fields of study (which may slightly vary from university to university), the Feluca caps are often decorated with pins and other objects.  The pins may represent the actual university attended or degrees earned, while other objects may be small gifts from lovers or even symbols of other Goliardic orders.  The amount of objects attached to the Feluca often depend on not only the personal taste of the scholar, but also from the general rules that oversee the decoration of the specific Goliardic order.  For example, freshmen at the University of Padova may not be permitted to wear any objects on their Feluca, while upperclassmen can.  There are also rules relating to the cord that hangs from the Feluca.

A proper fitting of the cap is also important, which is why each Feluca must be formed properly before it is worn.  The below video shows the owner of the cap store steaming and shaping my very own Feluca, which is blue in color for my own degree: Doctor of Jurisprudence.

As an Italian Enthusiast and college graduate, I was happy to learn about the Feluca Goliardica.  I plan to decorate mine with small pins from all over Italy, and wear it when I undertake any academic exercise, which as a lawyer, is quite often.  Maybe they will even let me wear mine into the courtroom (just kidding).