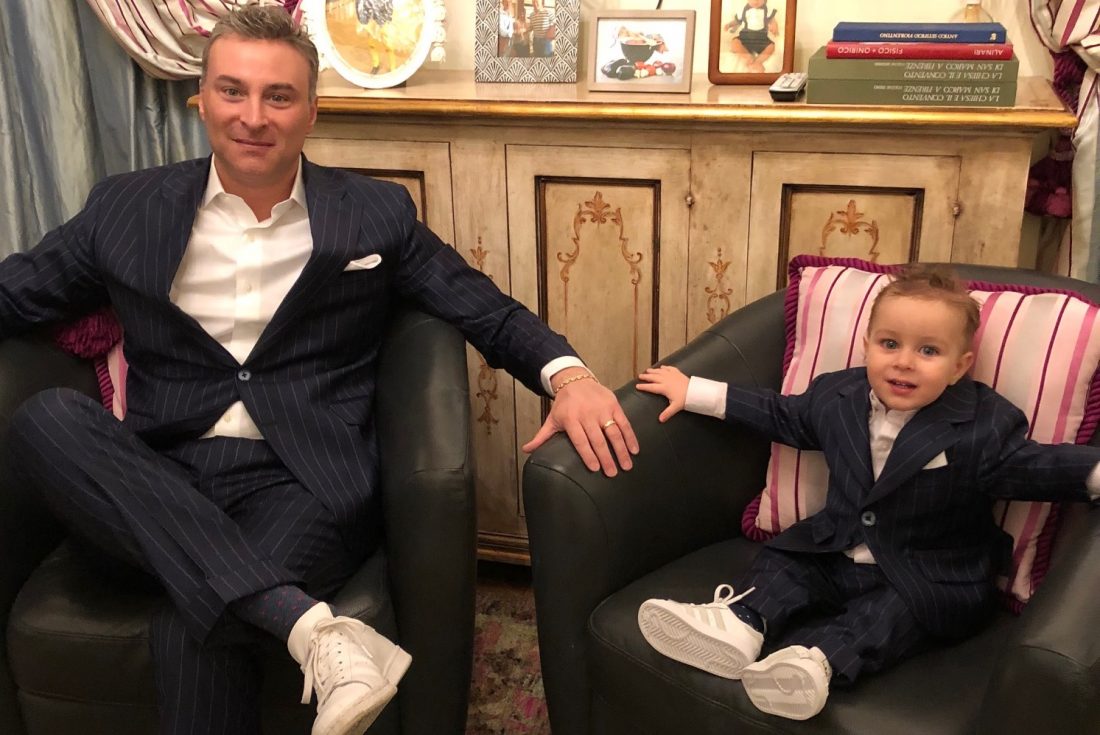 I recall back in 2008 seeing men wearing sneakers with suits on an Italian television series.  My first thought was, "that's unusual...".  Out of curiosity, coupled with my unabashed enthusiasm for Italian culture, I researched such fashion choices and found the practice to be a new trend in men's fashion in Italy (not yet accepted in the United States).

Milan, Italy, is the world's fashion capital where top clothing designers are headquartered, such as Armani, Dolce & Gabbana, Miu Miu, Prada, Valentino, Versace, etc.  It is no wonder, therefore, that when a fashion trend begins in Italy, it hits in the United States at a later time.  And so it was for the suit and sneaker trend, which was initially met with criticism in the Unites States.  For example, a successful men's shoe blogger (The Shoe Snob) wrote an article in 2010 essentially condemning the practice, stating, "...you would not catch me dead wearing my running or basketball shoes with my suits. Why? Because it looks fucking retarded and there are so many other ways to be comfortable while at the same time not look like I was raised under a rock without common sense."

Surely those were harsh words by the blogger, but as with anything, change is often difficult for people to accept.  As a few years passed with the Italian fashion trend inevitably becoming more popular around the world, including the United States, the New York Times wrote an article titled, “The Sneaker Comes of Age” discussing how such trend was born.  Many fashion experts pointed to Europe as its place of birth.  The world renowned fashion journalist, Dirk Standen, singled out Robert Rabensteiner “as one of the first to incorporate the haute sneaker look, which in turn influenced editors on both sides of the Atlantic.”  Rabensteiner, who was then the fashion editor of L’Uomo Vogue, is seen as one of the most influential figures in men’s fashion.  The New York Times article went on to state that at Pitti Uomo, one of the world’s most important men’s fashion trade shows held twice a year in Florence, Italy, “[e]very other guy” was suddenly “rocking orange-and-electric-blue Nike Flyknits with his summer suit.”

While certainly not traditional, the rules have been broken and a quick internet search today will reveal hundreds of male models dressed in suits and sneakers, including a plethora of celebrities, including American celebrities.

Personally, wearing sneakers with suits is not my preference, as I love wearing handmade Italian leather shoes with suits, and even with casual wear; however, it’s fun to break the rules sometimes, especially when a deviation from the norm becomes a fashionable trend in a culture you hold so dear.  For all the male Italian Enthusiasts out there, next time you wear a suit, throw on some nice Addidas sneakers and when someone smirks or comments, tell them with a laugh, “you don’t know shit about Italian fashion.”  And when you make it to Italy, wear the same outfit to dinner one night and blend right in.  Fashion, most of all, is about having fun.